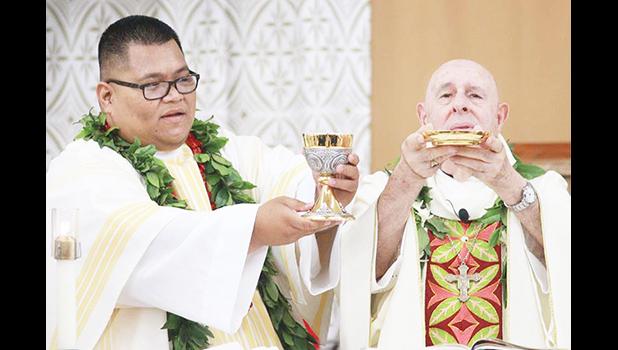 Honolulu, HAWAII — Who calls Deacon Ese’ese “Ace” Tui from American Samoa every Sunday, his first and most constant source of vocational support and counsel?

“My mother!” said the seminarian.

The prayers and wise advice of Miriama Tasi Toleafoa Aumaivao Tui will come to fruition at 6 p.m. May 21 at the Co-Cathedral of St. Theresa when Bishop Larry Silva ordains her oldest child a priest for the Diocese of Honolulu.

“When I first told my mom, back when I was only 16 years old, that I wanted to be a priest, she replied, ‘I will not say yes or no to you, but I do suggest that you go out and taste the world first before you make your decision,’” Tui said.

When he told his mother the second time of his desire to be priest, she said, “Good. I now give you my blessing.”

“She has been my biggest prayer warrior and intercessor since I entered” the seminary, he said. Their weekly phone conversations, and now daily Facebook greetings, are now mostly family and church chat, “But yes, she’s the one that I am grateful for,” he said.

Deacon Tui, 36, is finishing his final year of studies at St. Patrick’s Seminary and University in Menlo Park, California.

On the advice of his spiritual director, the seminarian has spent the last 11 months, since his transitional diaconate ordination on June 13, 2020, engaged in a “review of departure and transition,” that is, an examination of his leaving nine years of a structured seminary existence and preparing for the working life as a parish priest.

Some of the review is academic, he said, “going through all the courses you took in your four years of theology” and seeing “how they connect and are applicable at the parish.”

“Prayer is the focus in this preparation,” he said, spending time in silent adoration “allowing God to review my departure and transition with me.”

This being the Year of St. Joseph, Tui made a consecration to the spouse of Mary. What emerged was a deeper discernment of the “fatherly role” — that of his own father whom he lost at age 16; of the priest “father-figures” in American Samoa who “accompanied” his family during their days of mourning his father’s death; and his own future role and identity of being a “good father to others.”

An ordination, the major personal event that it is, takes a lot of planning. Deacon Tui is leaving much of the preparation to his family, “mostly my sister Emily.”

“She did a lot of the planning, contacting people, organizing and so forth,” he said. “I’m so grateful for her help because it allowed me to focus on my studies in the last semester,” he said.

He is trying to absorb all he can in the final months before ordination — the classes, the practicums, the time with his classmates. He hopes the strong brotherly bonds of his ordination class of 2021 will support him as he takes on the “scary” demands of the parish.

Deacon Tui was born and raised in Faga’alu, American Samoa, the oldest son of the late Siamani Kelemete Tui Faatiliga and Miriama Tui. He has three younger brothers, Sanele, Valoaga and Siamani Jr., and one younger sister Tilomai.

He got his nickname “Ace” on a whim of an older cousin who thought his given name was too long.

Tui attended Samoana High School in Utulei, American Samoa. He then studied computer science at Remington College for two years. His first job after high school was at a non-profit computer tech firm in American Samoa.

In 2006, he moved to Hawaii where he has extended family. Here he worked for five years for ARC, an organization serving persons with developmental disabilities.

He entered Mount Angel Seminary in Oregon in the fall of 2012 to study for the priesthood, graduating with a bachelor’s degree in religious studies and philosophy.

He will finish St. Patrick’s Seminary with a master’s degree in theology.