“The company has completed phase one and phase two of the resource confirmation and nearly 40 000 metres of core drilling done. In-house-owned core drilling rigs were acquired at a cost of nearly US$5 million. High tech exploration laboratory was acquired, installed and commissioned at a cost of US$$500 000,” he said.

Mhlanga said the company has a workforce of 200 made up of direct employees and sub-contractors, most of whom are locals.
The mine has not recorded lost time injury or fatality since inception.

Bravura Consortium is a multi-national mining house registered in the Republic of Dominica, and is domiciled in Ghana, with subsidiaries in Nigeria, DRC, Guinea and Zimbabwe.

In Zimbabwe, through a mining agreement signed in 2019, the group pledged to spend more than US$50 million to explore and mine platinum.
The country is seeking to exploit its reserves of platinum, which is expected to contribute at least US$3 billion under the US$12 billion mining industry by 2023 strategy.

Bravura is expected to eventually sink more than US$250 million in platinum-related investments in Zimbabwe as part of the deal.
The mining consortium is targeting to become Zimbabwe’s fourth major platinum miner after Zimplats, Mimosa and Unki.

This comes amid swirling rumours that the ex-ZB Bank boss and chartered accountant had resigned effective December 31, and yesterday the seasoned executive said it was impossible for him to have exited without any notifications – to and – from regulators. “GetBucks is a listed company and there is no way l would have left without public notices in line with the dictates of various regulators, including the Zimbabwe Stock Exchange and Reserve Bank of Zimbabwe,” Nheweyembwa said, adding “the stories could have been peddled by competitors angling for the profitable bank”.

“Banks are sensitive institutions and, so, we cannot act in an manner that is irresponsible, and not prudent to a point of undermining confidence in this key sector,” he said.

While the fintech company had recently applied to the central Bank for a moratorium on the new US$5 million capital adequacy ratio by December 31, Nheweyembwa said it was unfortunate that their detractors had tried “to conflate other things linked to group founder George Manyere and wholly unrelated to the bank”.

Owned by GetBucks Mauritius and Ecsponent Limited, the decade-old institution recorded a $170 million revenue as at September and had an inflation-adjusted mandatory capital base of $192 million, according to company secretary Wimbayi Chigumbu in a recent a trading update.

Appointed in January 2021, Nheweyembwa took over from Terrence Mudangwe – a former BancABC executive – and who had also succeeded Mercy Murevesi.

When the ex-GetBucks Mozambique MD and seasoned banker was appointed last year, the bank said it had managed to “weather the storm of a challenging economy and, therefore, it was reengineering itself for the future”.

The post I’m still at GetBucks: Nheweyembwa appeared first on The Financial Gazette.

Why BlackBerry held the tiny keys to my heart

Many vintage BlackBerry phones will stop working on Tuesday as the company turns off support for its operating system. For journalist Bill Wilson, it means the retirement of a faithful workhorse.

“Is that a Blackberry, I didn’t know they were still going?” has been many a conversation opener over the past decade, and particularly over the past five or six years.

From airport security to pubs and restaurants, even in hospital intensive care, strangers have looked on curiously and even asked to hold and look at my Q10 phone with its distinctive qwerty keyboard.

But my stock answer of “yes they are still going” would now have to add “but not their classic phones”.

Launched in 2013, that particular model, and BlackBerry’s phones since then, have faced an increasingly impossible battle as Apple and Samsung set about their battle for global smartphone domination.

Hard to believe that in the late 2000s and early 2010s, BlackBerrys were a ubiquitous sight on commuter trains, trams and planes across the UK – as business professionals scrolled through their emails and tap-tapped away their replies.

But now, after reports of the demise of BlackBerry’s operating system on many previous occasions, it really is the final curtain.

For on 4 January, the Canadian firm – which is now a specialist in cyber-security software – is to turn off its BlackBerry OS support. Termination

Announcing the termination, BlackBerry thanked “our many loyal customers and partners over the years”.

It means remaining die-hard owners of their devices won’t be able to make or receive calls, send texts, use wi-fi or access mobile data. 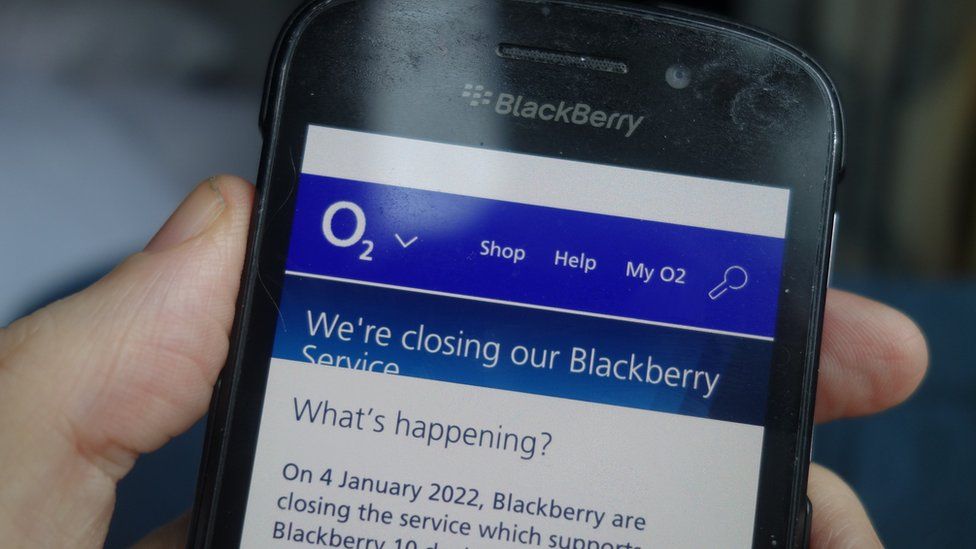 That includes all smartphones running on BlackBerry 7.1 OS and earlier, the BlackBerry 10 operating system and the tablet-based BlackBerry PlayBook OS.

Phones such as my antique Q10 ‎will completely cease to function, though it may remain handy as a back-up for contact numbers.

The only glimmer of sustained life is that post-2016 Blackberry-branded phones, which were made under licence by Chinese firm TCL, will still work as they use the Android operating system. Slow decline

Over the years it’s not just Blackberry phone user numbers that have dwindled, but support and functions have dropped away one by one.

Support for many apps, including BBC iPlayer and WhatsApp, was withdrawn from BlackBerry OS devices, and not long ago YouTube stopped working too.

Somehow or other I was able to circuitously get the latter two to work again by downloading links from far corners of the planet.

Apps have become a non-existent element for users of BlackBerry devices.

For example, at the start of the coronavirus pandemic in 2020 I found myself unable to download the various NHS apps, and had to sign in to places manually.

So, why go to all this trouble?

In short, it is still great for emails, with five or six different addresses all in one stream. I also love the qwerty keyboard with keys that depress and are not like pressing a hard plank of wood.

As phones have become progressively bigger, the BlackBerry still fits beautifully, and fairly lightly, in the hand. 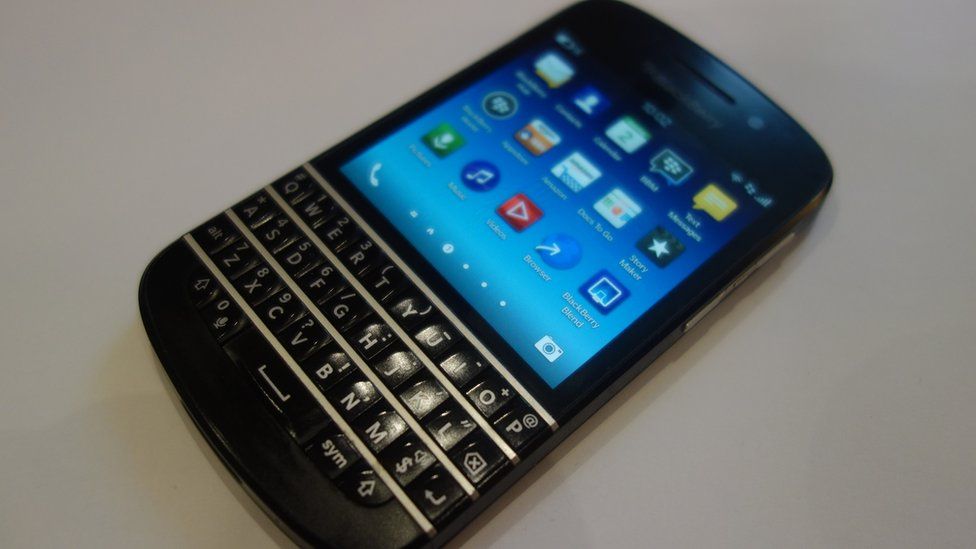 It’s a feeling with which Ben Wood, an industry analyst for CCS Insight and founder of the Mobile Phone Museum, agrees.

“The dedicated qwerty keyboard was an iconic design,” he says. “The devices became so comfortable in people’s hands that they developed muscle memory delivering fast and accurate text input.”

Mr Wood says: “It always makes me smile when I show kids some of the mobile phones of yesterday.

“They are enthralled by the design diversity. I even had a 14 year-old ask me the other day ‘why don’t they bring keyboards back?’ which made me smile.”

It is almost exactly 23 years since BlackBerry launched its 850 phone, and the company soon became the leader in providing emails when out and about on the move.

There was also the attraction of BBM – BlackBerry’s Instant Messenger service – although this facility attracted unwanted publicity during the riots that swept through many UK cities in 2011.

There were outraged cries of protest that the police could not monitor the encrypted nature of BBM messages to find out where looters would strike next. 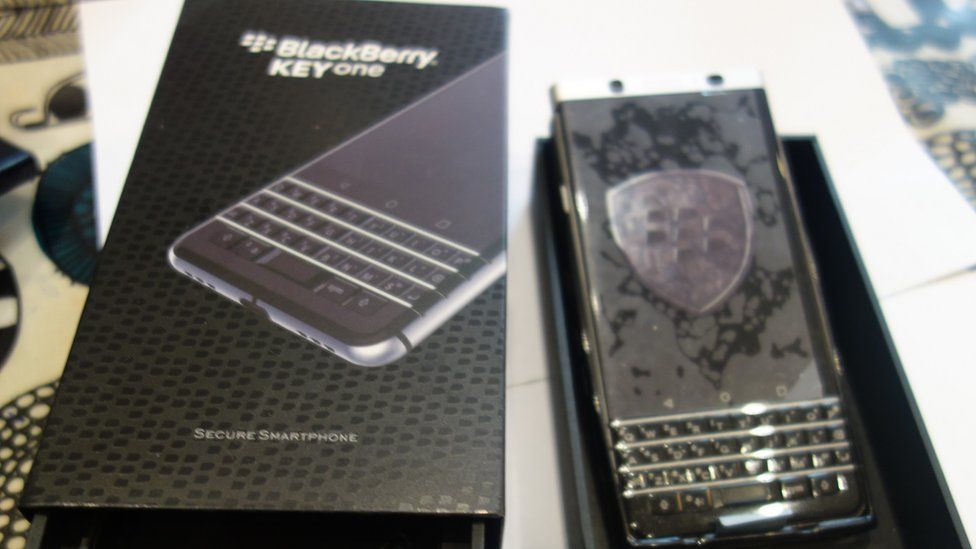 But the models that followed the iconic BlackBerry Bold would face increasing competition from Apple and Android phones.

So what happens next?

In 2020, TCL’s licence ended and was picked up by a firm called Onward Mobility. It promised a 5G BlackBerry running Android for 2021, but nothing emerged.

For now I shall try my luck with a second-hand Android Blackberry KeyOne – itself five years old now – (from Canadian eBay this time), and bought long ago in preparation for just this such day.

And I shall also hold on to my useless Q10 – you never know when in the future someone may ask…”is that an antique BlackBerry?” – bbc.com

The post Why BlackBerry held the tiny keys to my heart appeared first on The Financial Gazette.

Twitter has permanently suspended the personal account of the US Congresswoman Marjorie Taylor Greene for repeated violations of its rules around coronavirus misinformation.

The action against the Republican lawmaker came under Twitter’s strike system, which identifies posts about the virus that could cause harm.

The company had previously suspended the Georgia congresswoman four times.

Rep Greene said the ban proved that the company is “an enemy to America”.

In a lengthy statement posted to the social media outlet, Telegram, the 47-year-old said “social media platforms can’t stop the truth from being spread far and wide” and accused Twitter of aiding unidentified enemies in “a Communist revolution”.

The congresswoman’s ban comes after she had tweeted on Saturday, falsely, about “extremely high amounts of Covid vaccine deaths” in the US.

In a statement issued to the BBC, a Twitter spokesperson said that Rep Greene has been banned for “repeated” violations of its coronavirus misinformation policy, which allows four “strikes” with varying suspensions from the platform, before issuing a permanent ban.

The social media giant had issued her with a fourth strike in August after she falsely posted that coronavirus vaccines were “failing” and called on regulators not to approve new shots.

“We’ve been clear that, per our strike system for this policy, we will permanently suspend accounts for repeated violations of the policy,” the spokesperson said.

Since her election in 2020, Rep Greene has become one of Washington’s most controversial politicians.

She has been a vocal supporter of former President Donald Trump’s unsubstantiated claims that the 2020 presidential election was rigged and has in the past been associated with the QAnon conspiracy theory. Despite the US struggling to contain the coronavirus, from which more than 825,000 people now died, she has been a determined opponent of measures designed to tackle the virus.

She has frequently called into question the efficacy of vaccines and has regularly been fined for refusing to follow Covid guidelines in Congress, including those regarding mask-wearing on the House floor. – bbc.com